Staff are listed in alphabetical order

Inspiring the community to be frugal

Shabana Akhtar (25) is a local service provider who provides savings related services in exchange of a fee and is known as a “Sanchay Sathi”. As a “Sanchay Sathi”, she forms and maintains the Village Savings and Loans Association (VSLA) groups in her village Nalchia under Haldia Union, Saghata Upazila, Gaibandha Zila.

I am a Sanchay Sathi of the SHOUHARDO III program. Thus far, I have formed three VSLA groups in the past year. I have a plan to start one more group; we are making preparations. I have contacted the (savings) box maker to construct a new box for the new group. I have raised money from the team for the box and took help from SHOUHARDO III staff for this. I organize two meetings per month for each VSLA team, meaning I organize more than one meeting every two weeks. One of the meetings is dedicated to Rin (loan) meeting. Those who opt for taking out a loan take it out in that meeting; those who do not take out a loan save their money back in the box. 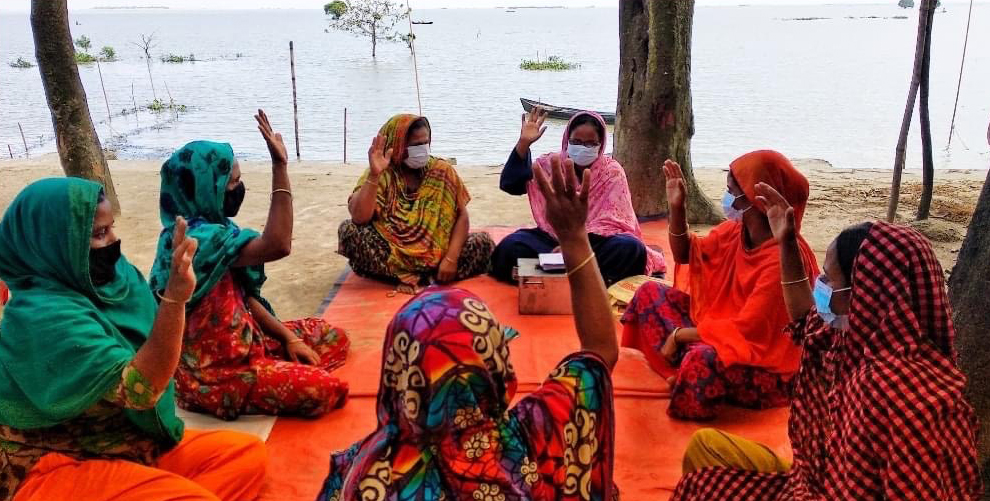 All of the groups I formed are of women. In our village, we have a total of five women’s VSLA and one adolescent girl’s VSLA group. The adolescent girls are eager to save. They either take the money from their parents or save it from the free schools (who also provide cash for attendance). The first group I formed was of 25 women. We gathered a total of 2,500 BDT as each contributed 100 BDT. I used 1,500 BDT to purchase the box from that money and saved the remaining cash in the box. When there is a share-out meeting, the group discusses themselves and gives me a fee for my Sanchay Sathi service. I have received 1,000 BDT this year for each group I formed. I have received 3,000 BDT altogether for forming three VSLA groups so far. One group recently had a share-out meeting, and I developed another new group for them afterward. They committed that they will give me another 1,000 BDT next year after their share-out meeting. They requested for my service to arrange their regular sessions too. Total 24 meetings are held for each group in a year.

Back in 2017, the SHOUHARDO III staff visited and asked us if we wanted to form a savings group. We were eager and started our VSLA group. I was only a member back then. It helped me understand the group mechanism when I became a Sanchay Sathi a few months ago. I went to the SHOUHARDO III Bharatkhali office and Gaibandha office to attend a residential training on Sanchay Sathi recently. My previous VSLA group nominated me to take the training. I received a smartphone for being a Sanchay Sathi to operate the “Sanchay Sathi” pilot app. We received training to use the app as a repository for all the VSLA groups we formed and will form in the future. Although I am getting used to it, it is helping a great deal to monitor the group members’ and store all relevant information. (Pointing at the phone, see the photo) Look at this app; we have the names of the members and their contributed amount.

VSLA groups are a good savings approach for the women in our community. We (women) could not save money before. If we had 500 BDT at home, either we gave it to our husbands or spent it on family expenses. One way or the other, we spent our money and had no savings. The bank procedure is complicated. We are illiterate people, don’t know much about it. Through VSLA, we meet other women and have a common goal to save money to help our families and us in the future. After some time, we can even take the saved money to buy livestock or poultry to improve our lives and survive during floods or Corona.

Sanchay Sathi has become a good income opportunity for me. Before Sanchay Sathi, I did not have an earning source. No one listened to me when I wanted to say something; I felt neglected and unheard. Now that I am a Sanchay Sathi, people in the community respect me. I regularly advise the VSLA group members to attend the meetings on time and not to miss a deposit. We discuss what savings we can do and how it can help us in the future.

With the 3,000 BDT I received as being a Sanchay Sathi, I bought a goat. It is pregnant now, and I hope to sell the newborn goats next year to earn more money. I am indebted to SHOUHARDO III for choosing me to be a Sanchay Sathi and helping the women in our community to connect with each other through the practice of savings.

Inspiring the community to be frugal