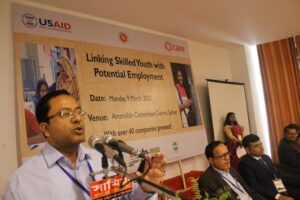 USAID’s SHOUHARDO III program partnered with BdJobs to organize an employment fair in Amanullah Convention Center in Sylhet district targeting local youth. The two-day Job Fair aimed to link the youth to potential employers and was held from 8-9 March. A Lessons Learned event on the second day was designed to hear from the youth on how the training they received has by far met their needs on securing employment. The event was supported by Technical Training Center of Sylhet, Md. Moshiur Rahman, Divisional Commissioner of Sylhet graced the event as chief guest and inaugurated the session. Over 200 youths participated in the fair with special guests from key government agencies such as Chamber of Commerce, Department of Public Health and Engineering, Department of Social Welfare, Department of Women Affairs, and Department of Youth Development. Employers from at least 40 private companies (PRAN RFL, Walton, major hotels in Sylhet and IT-related companies) and representatives of different non-government organizations are present too. Emphasizing on enhancing on developing vocational skills, the Divisional Commissioner asserted, “there needs not only to get a higher education, rather one should get vocational and develop other relevant skills to land a job and income-generating activities”. As the number of jobs is limited against the number of job seekers, he added that the youth can also be proactive in exploring entrepreneurship in different fields. SHOUHARDO III is a USAID Development Food Security Activity being implemented by CARE Bangladesh in the char and haor regions of northern Bangladesh since 2015. One of its key components is youth engagement closely linked to its work with the private and public sector in creating employment. Out of the targeted 10,000 youth to reach in the duration of the activity, the program already reached almost all of them with employability skills training that included business planning, communication and negotiation, and financial literacy. Over time, the youth were trained on different trades that are in-demand in the job market including non-traditional ones such as hotel management and industrial machine operation. SHOUHARDO III youth interventions are geared to exploring and the potentials of rural youth and helping them realize them to prevent them from becoming the next generation of the poor. This was the third Job Fair that the program organized this year, with the first two held in Gaibandha and Kurigram in January. In those two fairs, over1,100 youth participants attended with over 20% of them already reporting being employed in driving, electrical wiring, and welding fields among others. In this Job Fair, 40 renowned local companies collected the youths’ CVs and shortlisted those for interview. Rafez Ul Haque from Farmis Garden Hotel in Sylhet shared, “We came for this Job Fair with the plan to recruit 15 staff for our restaurant, front desk and guest relations. I am happy that we got all those we are looking for here. We also opened the opportunities to those who are fresh graduates.” Runa Akhter, a SHOUHARDO III female youth participant who came all the way from Baniachang, Habiganj was excited as she was interviewed for a Computer Assistant position. “I need to start somewhere, anywhere. I am 22 and at my age, I would normally be married but with the knowledge I learned from the program and my parents’ support, I will follow my dreams to work first before having my own family.” USAID’s SHOUHARDO III recalibrated its work with the youth intending to hone their potentials, mobilizing them further not to become the next generation of the poor. This is also the third Job Fair that the program organized this year, with the first two held in Gaibandha and Kurigram in January. Some 1,100 youth participants joined those fairs with at least 20% of them already reporting being employed in driving, electrical wiring, and welding fields. From SHOUHARDO III, Ishrat Shabnam, Acting Chief of Party shared in her opening remarks: “Youth are touted as the future of any nation; unfortunately, our economies are not absorbing as many of them as possible the onus lies with governments, private sector and society at large to pursue policies and programs that expand opportunities for youth. Under the funding of the US Government, the program has been working to make this future a reality. An unfortunate truth is that “the future is not what it used to be”, job markets are evolving so fast that many career paths will be redundant before those pursuing them achieve the relevant skills. It is time to focus on transferable skills that don’t tie youth to one career path but allow them the dynamism that matches the fast-evolving workplace. Employability rather than a defined career should be our focus.”