“It ends with me”: Women United to End Violence against Women 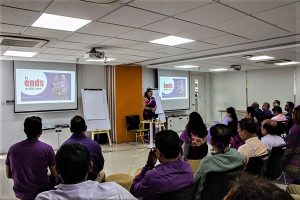 In light with the theme of this year- “I am Generation Equality: Realizing Women’s Rights”- SHOUHARDO III of CARE Bangladesh has launched a Violence Against Women (VAW) campaign on the day of the International Women’s Day 2020. This campaign focuses on the cessation of reinforcement of harmful norms and practices by mothers-in-law in SHOUHARDO III implementing areas, especially Char and Haor areas of Bangladesh. The aim is to reduce violence against young brides and mothers and their subjugation by engaging mothers-in-law (primarily) and men (secondarily). The need for this campaign evolved from SHOUHARDO III’s experience of working in remote communities in char and haor regions on gender equality and women empowerment since 2015. Through community engagements that directly mobilized age and gender-specific participants’ groups, the program discovered that women who are newly married or young mothers often lag behind due to limited opportunities. They have limited mobility and resources to engage in income-earning opportunities, let alone be involved in the decision-making process in the households and in the communities. Also, many of them align with traditional gender roles to live up to the discourse of ‘good brides’. Mothers-in-law play a vital role in ensuring this, more specifically, reinforcing the traditional norms and practices. Activities of this campaign include widespread social media campaign, radio episodes at the district level, theatre shows, and VAW museum at union level. This campaign attempts to promote behavioral change within the family dynamics in Bangladesh, as often this is overshadowed by the bigger and larger agenda of gender rights. SHOUHARDO III uses a multi-pronged approach to achieve USAID’s outcomes on gender equality in response to the challenges faced by marginalized women and girls living in the Char and Haor regions in Bangladesh. These include reducing gender disparities in the access to and control over and benefit from resources, assets and opportunities; reducing gender-based violence (GBV) and mitigating its effects; and increasing the capability of women and girls to realize their rights, determine their life outcomes, and influence decision-making in their households, communities and the society in general. SHOUHARDO III has been intervening in Char and Haor regions for more than four years with an integrated approach to address women empowerment. To ensure equality between men and women, and empowering women, SHOUHARDO III applied EKATA (Empowerment, Knowledge and Transformative Action) approach and promoted male champions in the community. The approach uses a participatory process to enable groups to identify root causes of gender-based issues and find solutions to these problems. They prepare and implement action plans using their own resources. Women and girls use training in leadership, group dynamics and legal rights to complete gender analyses in their communities and work with Village Development Committees (VDCs) to contribute to their own and community development. As of today, 947 villages were impacted by EKATA and 33,102 women and adolescent girls were part of EKATA sessions.