Plinths for floods: how this infrastructure played a critical role in people’s survival 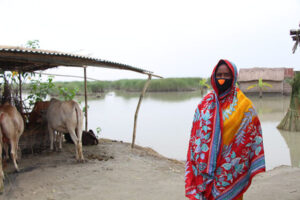 Floods are normal monsoon phenomena in the deltaic plains of Bangladesh which majorly affect the north-western and north-eastern region of the country. Having numerous networks of rivers, canals and coast creeks with extensive flood plains, 1.7 million sq-km of Bangladesh is inundated annually (Uddin, et al., 2017). USAID’s SHOUHARDO III is implemented by CARE in the northern part of the country. With the monsoon season already started during the second quarter of the year, a total of 15 upazilas (sub-districts) of Sunamganj, Gaibandha, Kurigram, Jamalpur, and Sirajganj districts have been inundated in July 2020. Approximately, 30,000 thousand families in the low- lying areas have been reportedly affected with 5,000 people have taken shelter in river embankments, flood shelters and neighbor’s houses together with their livestock and other assets. SHOUARDO III has always been upfront about helping the vulnerable people and families, especially when a natural disaster like this comes. Each year, it allocates resources for emergency response, where, in 2019, it mobilized 3 million USD for the flood-affected population in northern Bangladesh. The flood-response activities were comprised of three major components- (1) household plinth raising, (2) livelihood recovery support through skills training, and (3) cash-for-work. These were all geared at providing support to the participants to recover from their losses and help labor-deficient households be better prepared for future shocks, including the floods which get worse every year. This year, the floods inundated many of SHOUHARDO III areas as anticipated. Even with the coronavirus disease 2019 (COVID-19) already crippling people’s livelihoods and healthcare systems, natural disasters will occur as they always do. The COVID-19 pandemic has created so fear among the people that even with elevated levels of flooding many people chose not to go to shelters for fear of overcrowding and infection. As with each season, rural households continue to explore ways to absorb shocks. More so program-assisted households are going through this flood in the safety of their now elevated plinths. The raised plinths not only saved them the hustle of moving, their animals and property are safe and some have become hosts to their neighbors and relatives during this critical time. Rehana, a program participant from Bakshiganj in Jamalpur district shared, “People’s lives are in danger with the ongoing flood. They come to take shelter when they have nowhere else to go. I have taken in a family of my neighbor’s with their cattle and a small child.” 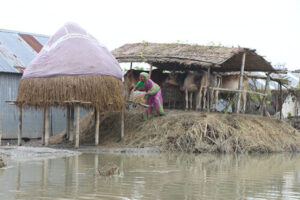 The raised plinth of houses has also helped the participants better prepare for this year’s flood. Shukhi Begum from Islampur in Jamalpur stored dry food, matches and soap to prepare for the flood. The raised plinth ensured that these remained dry. During last year’s flood, she and her family took shelter in an open space of a sand platform beside their house which rendered them feeling unsafe and insecure. The raised plinth came as a blessing for them and surrounding families as they invited people to stay with them. Two neighboring women with their young children are currently taking shelter at her house as their own homes are damaged due to flood water. Shukhi shared, “Raised plinth at my household has helped people from my neighborhood also. During the flood, young children may go into the waters and fall sick. I told my neighbors that my door is open for them to take shelter during the floods.”

Rehana and Shukhi are proofs that raising houses’ plinths are worthy investments especially in areas that are normally inundated by floodwaters. Apart from providing a safe space for evacuating families and livestock, these participants also venture into small-time vegetable production in the raised plinths, of which the nutritious produce their families consume, and sell the rest for income. The tube wells and latrines that are also on a raised platform particularly helped women and girls to access such essential facilities during the floods, as it was difficult to obtain clean water and use the latrine every time there is flood, according to these women’s and their daughter’s experiences.   Written by Sairana Ahsan, Reporting and Documentation Managerof SHOUHARDO III, CARE Bangladesh.
References Needs Assessment Working Group (NAWG), 2020. Humanitarian Response by OCHA. [Online] Uddin, M. S., Shamrat, R. I. & Rahman, S., 2017. Flood and Flood Management in Bangladesh. [Online]