The COVID-19 situation in Bangladesh has seen exponential growth in the past few weeks. The situation is noticeably worse in places where monsoon floodwater has inundated large areas, requiring people to take shelter. The official government general holiday (the general holiday was imposed by the Government of Bangladesh as a way to restrict movement by all, especially the government offices, along with private, local and grassroots organizations including businesses and markets, it was declared from 26th March to 30th May 2020) was lifted on May 31st and since then the lifestyles of many have changed. The floodwaters have created a dire situation, surrounding many healthcare facilities (HCF) which are preventing communities from accessing health services. There has been a reduction in adherence to the recommended GoB health guidelines by rural communities since the GoB have lifted movement restrictions. Patient flow has been the highest in CCs, especially in comparison to larger hospitals where people fear they’ll catch COVID-19. People in grave need are flocking to the HCFs, even those that are underwater and are relatively harder to reach; and HCFs are reporting seeing 40-70 patients per day. Additional USAID funding has positioned SHOUHARDO III, implemented by CARE Bangladesh, to be at the forefront of the national COVID-19 response initiatives, aiding both community people and healthcare workers. With the 2.83M USD, SHOUHARDO III has established 210 handwashing stations and distributed disinfectant supplies in community clinics (CC), family welfare centres (FWC) and upazila health complexes 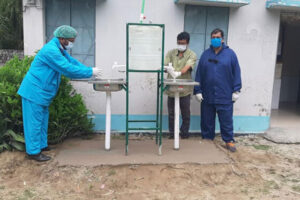 (UHC) in 10 most vulnerable districts in the remote Char and Haor regions. To date, the program has reached out to 10 healthcare providers (HCP) to gain further insight into the impact of and response to COVID-19 and health practices, including handwashing. The handwashing stations have significantly increased handwashing practice by both the clinic staff and incoming patients. Previously, none of the 10 HCFs had any automated handwashing facilities. As a national response to COVID-19, the Directorate General of Health Services mandated improved water, sanitation, and hygiene practices (among other health guidelines), and so the HCFs arranged a bucket, mug and soap for the patients to wash hands before they were entering. Despite good intentions, this method unfortunately created the possibility of cross-contamination due to many people touching and holding the mug on the same day. It also proved cumbersome to refill in the bucket every time it was empty due to lack of water sources nearby. The establishment of SHOUHARDO’s handwashing stations (HWS) were a welcomed improvement and have seen patients who are visiting the facilities washing their hands more than ever before. These HWSs were major improvements that were added in the prevention of COVID-19 spread. The HWSs had a basin, water tank run by electric motor, a tap and soaps beside. This arrangement decreased the chances of cross-contamination that was present while using a bucket, mug and soap, when one has to keep holding the mug until they can finish washing hands. The handling of bucket also involved touching the rim of the bucket several times a day. The only high touch surface on the HWSs is the tap, which can also be washed with soap before turning off. The risk of cross-contamination decreased greatly in this way. Ali Hasan, a CHCP from Delua CC, Belkuchi, Sirajganj shared, “The tendency of hand washing among the patients has increased. When people see there is an arrangement of hand washing, they willingly wash their hands. Previously, there was no such arrangement of handwashing for the staff. Staff are also practicing hand washing.” SHOUHARDO III’s improved handwashing stations are providing a continuous supply of water through an electric line has been connected to the tank. However, now that the initial soap supply from the project has run out, there is some uncertainty around where and how that will be maintained. Some clinic staff were personally covering the expense, and some received additional supplies from the Upazila hospitals. There were a few reported incidents of children destroying the soaps by either stealing or playing with them. Md. Salim, a CHCP from Gouripur Karpasha CC, Nikli, Kishoreganj shared, “Water in the tank is easily ensured as there is a water pump. But, ensuring soap for every day is being difficult. The HWS is installed in an open place. Children have damaged the water tap for several time while playing in the field. They sometimes take away the soap. Ensuring soaps for daily use is difficult from personal arrangement as we have to spend from our own pocket.” The initiative of handwashing station installation has been praised by the HCPs in all 10 HCFs. They also informed that they received PPE, gloves, mask, a few disinfectant sprayer and liquid soaps from government and other local NGOs. Md. Alif al Suzon, a CHCP from Megulla CC, Daulatpur, Belkuchi, Sirajganj shared, “What SHOUHARDO has done is really praiseworthy but to observe the expected change in the community firstly awareness building among the people is really important.” As for disinfectant supplies, all HCFs but one did not have any arrangements for disinfection supplies or sprayer. One UHC had received regular supplies from government of Bangladesh (GoB). Other than that, before receiving disinfectant supplies from SHO III, a few CCs just swept with a broom or arranged their own bleaching powder supply. The aid from SHO III has significantly helped the HCFs properly disinfect during the pandemic. The HCFs mostly have a temporary cleaner to clean the premise, a few where the HCPs themselves clean the premise. The supplies they received from SHO III included bleaching powder, Chlorine Solution, liquid hand wash and soap, which lasted for one month. The disinfectant solutions are being sprayed 2-3 times daily to disinfectant the HCFs premise. The disinfect supplies have greatly increased the cleanliness of the HCFs. Md. Mosaraf Hossain, a CHCP from Tangari Para, Bogar Char, Bakshigonj, Jamalpur shared, “Previously, we just used to sweep every day with a broom. But, these days, we wash the clinic with the disinfectants which has improved the environment of the CC greatly.” Dr. Most. Shamsunnahar, UHFPO of Phulbari UHC, Kurigram shared, “We can give service more confidently now. The HWSs and spraying of disinfectants provide protection from all sides to provide better health service.” As for the continuous supply for the disinfectants, it is not possible for many small clinics to bear the expenditure by themselves; hence they requested from the bigger hospitals in their districts. For the UHCs, they put on requisition when the disinfectant runs out, well ahead in advance. The COVID-19 preventive support from SHO III came in aid to the rural people, HCPs and the HCFs. In such remote areas of Char and Haor, these was a timely aid as per Md. Mosaraf Hossain, a CHCP from Tangari Para, Bogar Char, Bakshigonj, Jamalpur. He shared, “What we could do personally for handwashing in the CCs was not sufficient. Besides, no one except SHOUHARDO came forward in this regard. I would like to thank SHOUHARDO.” Written by Sairana Ahsan, Reporting and Documentation Manager of SHOUHARDO III, CARE Bangladesh.