Khas land, a potential means for lifting the landless households out of poverty

“I cannot explain my feeling when I heard that the piece of land where we have been living for the last 15 years, will now be registered in my name. I will never forget those days when I used to hear that, we the displaced and landless are like cows and dogs” Shared by Kamal Hossain, a participant of SHOUHARDO III Program of CARE Bangladesh. 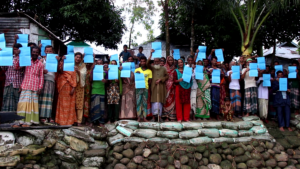 Landlessness is one of the major challenges for ensuring food security among the Poor and Extreme Poor (PEP) in Bangladesh, especially for those living in the geographically vulnerable areas like Char and Haor. it not only leads to food insecurity but also perpetuates powerlessness among the landless households. According to the Bangladesh Bureau of Statistic (BBS) 2016, in Bangladesh, approximately 23.2% of the population live below the poverty line and more than 12% are still considered as extremely poor. Among them, at least 4.5 million people are landless which poses a huge challenge to address food security in the country. Therefore, the Government of Bangladesh has enacted Khas land settlement policy back in 1997 to distribute Government-owned agricultural land among the landless families. According to the survey of Land Ministry, about 8352 acres of Khas land has already been distributed across the country among 9283 landless households in the Fiscal Year of 2015-2016. However, currently, there are more than 0.8 million acres of distributable Khas land and is potentially available to be claimed for the landless poor and extremely poor families. However, due to the ineffective implementation of the Khas land settlement policy, most of these lands are forcefully occupied by the powerful illegal occupants. Besides, the process of obtaining Khas land itself is lengthy as well as complicated for the PEP. Taking these realities into account SHOUHARDO III program has been advocating with government for creating accessibility for PEP landless households to Khas land. At the initial stage, the program developed strategy for advocating on Khas land. As a part of it, a two day training was organized in Kishoreganj on October 2018 with the aim to build capacity of the frontier staff for better facilitation of the applications and lobbying with the government officials who are engaged with Khas land settlement process. The training was organized with two folded objectives. Firstly, to provide theoretical information and secondly, to have a practical exposure visit at Union land office and Upazila Land office which finally, ended with comprehensive action plans by the Partner NGOs. According to the action plan, Dhaka Ahsania Mission-DAM oriented the Village Development Committee (VDC) in Pathabuka village of Dakshin Shireepur Union, Tahirpur, Sunamganj on the application process of Khas land. With the support from the program the VDC identified that, a major part of the village is occupied by landless households of the program who had migrated to this place about 15 years ago. Program started assisting these people by helping them fill up the application for Khas land and collecting Nationality and landless certificates from the Chairman of the Union Parishad. Then 56 applications of the landless households were submitted to the Upazila Land Office of Tahirpur. Accordingly, the Upazila Land Office sent the applications to the Union Land Office for verification. Finally, the Upazila Khas land Settlement Committee sent the final list of the eligible applicants to District Khas land settlement Committee for approval. By this time, the program continued forwarding this land agenda to the government officials through individual lobby meetings and Program Advisory Coordination Committee (PACC) meetings at the respective Upazila, District and Division levels so that, the government officials engaged with Khas land settlement process can prioritize the eligible households. The program also continued rigorous follow up and tracking to know the current status of the applications to speed up the application process. 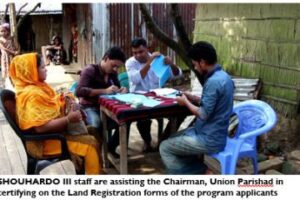 The government officials appreciated SHOUHARDO III for accelerating the Khas land issues and assured to prioritize the distribution of these lands to eligible households. Finally, 42 households of SHOUHARDO III and 10 of the neighboring households of the Pathabuka Village have been allocated with 2.595 acres Khas land. Currently, the Upazila Land Office, Taherpur is settling the registration of these land after which the deeds of land transfer will be handed over to these landless families. The transformation among these landless PEP families is remarkable. These lands are not just an economic resource for them, but also a means for social and political empowerment. These families now have a permanent settlement which upholds dignity for them and their future generation besides granting economic and nutritional benefit. Moreover, the ownership of the land is helping them in creating diversified sources of income as well as reducing the risks associated to landlessness. Nure Ja, one of the Khas land receiver said, “I know this land will be mine and nobody will be able to force us to leave this place anymore. I can now plan for the future. I will have my own homestead garden, where I will grow vegetables. I have a dream to establish a poultry business which I understand is very much possible now”. Besides, the policy obliges joint ownership for husband and wife and confers the ownership to both of them which enables a potential transformational platform for the female headed households especially in a country like Bangladesh where women’s names rarely appear on land deeds and contracts due to the unequal treatment and discriminatory customary practices regarding the ownership of land. Anguri Bibi shared how a piece of Khas land helps the women headed households. She said “I lost my husband seven years back. I have experienced all sorts of sufferings since then. We did not have any place to settle. I had to work day and night to survive along with my three children. I used to live with a constant fear of being driven away. I believe, now my life will be changed. I felt proud seeing my name on that blue paper as the owner of this land. It is now a source of strength for me to work more and move forward”. There is no doubt about the potentiality of Khas land as a sustainable means to ensure food security among the landless especially while looking through resilience and gender lens. Khas land settlement policy is one of the progressive policies of the government however, the initiative has fallen short on its effective implementation. Therefore, SHOUHARDO III aims for rigorous lobbying to address this implementation gap and assist the local government as well as communities to bring a long lasting change in the life of landless poor and extreme poor people by facilitating the distribution of Khas lands.