Nothing is impossible: story of disabled Belal

According to the ‘Household Income and Expenditure Survey (HIES)-2016’ published by Bangladesh Bureau of Statistics (BBS), Kurigram is Bangladesh’s poorest district for a number of reasons – the number of natural disasters that frequent it, malnutrition and morbidity rate. During winter, it also bears the brunt of cold given its location in the northernmost part of the country. SHOUHARDO III, a USAID Food for Peace initiative that aims to deliver gender equitable food and nutrition security for the Poor and Extreme Poor (PEP), has been providing key interventions in Kurigram and seven other districts in the northern part of Bangladesh since 2015. 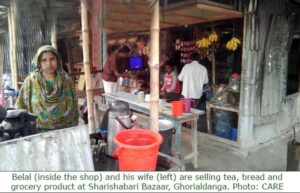 When you are born and raised in a poor community, with not much opportunities for growth, chances are high that you’ll be poor too. This was the case for Belal, and as if the environment has not been enabling at all, he was born with a disability. There are four people depending on him – his wife Bizli, and his two sons (13 and 10 years of age) and one daughter (3 years of age). They live in Paglar Darga village, next to the mighty Teesta River. Each year, it’s like playing hit-and-miss with the waters whether their house will be washed away or not when floods come. It is common for the people in their village to lose whatever they have when natural disasters strike. Before becoming part of the program, he was a street vendor selling bread. Without any other source of income, his family could not eat the right amount of food per day, more so, the children had to stop going to school. As the years went on, Belal was engulfed by the reality that his children will be the main ones to suffer if he continued to have this only type of livelihood. Eventually, he was engaged as an extreme poor participant of CARE’s SHOUHARDO III. Belal received training on small business trade including for life skills, and received BDT4,500 (USD 53) as startup capital. Being a worker on the street for a long time, he already knew what would sell to the people, so he started a small sundry shop with a tea stall in a nearby local market. Through the support of the program’s Village Development Committee and the Union Parishad from where he lives, he was enrolled at the government’s social safety net services too, to receive additional support given his condition. This year, he started receiving BDT 700 (USD 8) per month. From his small shop, he started earning BDT 1,500 to BDT 2,000 (USD 18 to USD 24) per day. Per month, his net income increased with range from BDT 7,000 to BDT 8,000 (USD 83 to USD 95). Belal, same as his dream to give his children a better life, was unstoppable. As soon as his income stabilized, he leased 25 decimal land that cost him BDT 90,000 (USD 1, 065). To pay for it upfront, he took out loan from a microfinance institution run by a local NGO worth BDT 70,000 (USD 830). In that piece of land, he cultivated an improved variety of rice, the information of which he got from the local Department of Agricultural Extension representative, in addition to the technical knowledge on how to properly use insecticides. For this harvest season, Belal expects to get approximately two metric tons of rice. Earnings from this harvest would be used to buy his son a computer, which would also be a source of income for the family. He also allocates savings each month with minimum of BDT 500 (USD 6) through a local bank. After years of hard work and taking every opportunity to grow his business, Belal is proud especially his children went back to school. “I will do anything for them not to leave school again until they finish and could have options to live a better life – much better than I have”, Belal shared. The Union Parishad from where Belal lives, is also proud of Belal, “I am really happy to witness the enthusiastic attitude of Belal. His condition did not stop him from achieving what he dreams for his family.” Belal certainly set the example not just for the program but in his community as a whole.