Someja, Winning the Battle of Life

Someja (38) is from Pochabohla Village, Islampur, Jamalpur. She lost her father when she was two years old. After six months of her father’s death, her mother got married for the second time. From two to eighteen years of age, she lived with her grandparents. Her grandfather was a hawker and was not financially solvent. As a result, she had to discontinue her studies when she was in class seven (approximately 13 years of age). Afterwards, she helped her grandmother in household chores. She got married with Mokter Ali at the age of 18. With a lot of hopes and dreams, she started her married life; but the situation was not in her favor. Her husband is a day laborer and does not work regularly. She had to depend on her father-in-law to meet the needs of her and her family. Her father-in-law often quarreled with her husband as he was extremely lazy and freeloading on his father’s money. Day by day the situation got worse. After nine years of marriage, her father-in-law cut ties with them financially and enforced them to move out of his house. Her husband did not have work then either; on top of that, Someja found out that she was pregnant. They spent many days almost starving and struggling to find sources to meet their ends. In 2016, she learnt about SHOUHARDO III program; that a program is working in her in-law’s village to support the poor and extreme poor (PEP) and guide them to change their financial situation. Someja attended all the sessions from the start and was enlisted as a PEP participant of the program. She received an on-farm training from SHOUHARDO III on goat rearing. She learnt about goat rearing process, types of goats, diseases of goats, vaccination and other goat rearing techniques. After completing her training, she received BDT 3,000 (USD 35.41) from SHOUHARDO III to buy goats and started building a small business. She initially bought a goat; after three months, the goat gave birth to two goats. She later sold these two goats to obtain some cash. Along with this cash and some of her savings from her expenditure given by her mother, she took barga of some land to cultivate (sharecropping). She cultivated different types of seasonal vegetables like pumpkin, korolla etc. which provided her with an income. She also has an additional income through selling eggs and chickens from the three hens and eighteen chickens that she is rearing now. 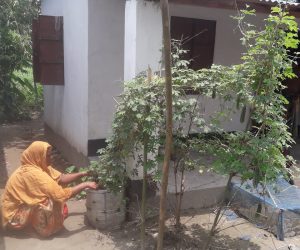 A new problem arose in her life. In the rainy season, her house and cultivable land are flooded due to being low-lying lands. One year ago, in a resilience meeting arranged by the local DRR (Disaster Risk Reduction) Leader, she came to know that the homestead vegetables can be cultivated in sack during the rainy season. She adopted the idea and started to cultivate vegetables in sacks to feed her family and sell in the market. SHOUHARDO III helped improve her residence situation as well. Her house was so badly torn that rainwater seeped into her room through the holes of the tin roof. The program helped her to get enlisted for a new house from the Government of Bangladesh’s housing initiative called ‘Ashrayan Prokolpo’ on celebration of Mujib Year. SHOUHARDO III helps the participants to be aware of their opportunities and create a linkage with the government body so that they can avail all the possibilities to improve their life. Now she has a tin roof and brick house. Someja does not fear rainy seasons anymore. Her husband still does not work regularly. Someja does not need to depend on others for daily necessaries anymore. She bears her family expense on her own costing around BDT 7,000 (USD 82.46) per month.

She has two sons (11 and 2 years) and one daughter (five years), and two are in school. She is happy and smiles like a winner. She said, “I am grateful to SHOUHARDO III. There are thousands of Someja like me in Bangladesh. If SHOUHARDO stands by their side, they will be able to survive like me.”