Char Gudhibari is a small village within the Koijuri Union in Shahzadpur Sub-district at Sirajganj District. This small village is situated at the banks of Jamuna river and is blessed with a variety of chirping birds around. This paints a picture of an artist’s imagination. Char Gudhibari village has 314 Thanas even after it shrank due to river erosion. The main occupation of the local population is farming. However, they also engage in weaving, fishing, boating, and other small businesses during other times of the year. The literacy rate of the population is not lenient either. Those who are involved in farming work on other’s land as a day labour farmers apart from working on their own lands. Paddy is the main crop of this village, and Boro and Amon paddy are cultivated annually. While Boro is easily harvested, the farmers are continuously worried about harvesting Amon paddy due to floods. Flood is their constant companion every year. 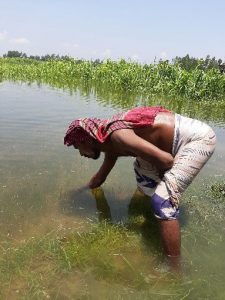 Abdul Khaleque is a small farmer in Char Gudhibari, who spent his days in severe poverty with his elderly parents, wife and two children. He spent his days in agony as he worked as a day labour farmer and struggled to meet the need of his family members. His family had daily row and quarrels due to this which was making him miserable day by day. In 2016, Abdul Khaleque was included to the SHOUHARDO III program as a poor participant in the crop professional group and given the unique number 051. Later on, by participating in the Farmer’s Field and Business School group meetings regularly, became a forthcoming and skilled farmer through the farming trainings, including strategy, improved seeds, pest management, crop sowing calendar, disaster risk, and management, etc. and overcame his struggles.

According to the sub-district Agriculture office, 4,562 hector land was damaged and 35,251 farmers incurred a loss in the flood of 2019. Char Gudhibari was one of the most damaged ones, the entire village was inundated with floodwater and the crops alongside crop beds were damaged as they were completely submerged in the floodwater. Abdul Khalque was the only exception farmer who received no damages to his crops due to floods. The flood-resistant paddy invented by the Bangladesh Nuclear Agricultural Research Institute was the key. This was promoted to the community by Field Trainer Taslima Aktar. She asked the community to provide the names and information of two farmers to demonstrate this paddy in two plots. Abdul Khalque expressed his interest to cultivate this flood-resistant Bina dhan (paddy)-11. Afterward, he received 4.5 kgs seeds of the respective paddy. He then sowed them and within 5-7 days the crop beds were filled with green leaves. Abdul Khalque felt ecstatic when he saw the crops growing little by little. This happiness didn’t last long as floodwater entered the fields within a few days afterward and kept on rising rapidly. This resulted in all the crop growing lands being inundated for around 15 days, including Abdul Khalque’s crop beds. Even though he knew that his crops were flood-resistant, the community people still badmouthed his approach and stigmatized it. Abdul Khalque started feeling insecure about his decisions and was worried. Gradually the floodwater receded and the condition improved throughout the village, however, the community people still told Abdul Khalque that his crop beds are ruined due to flood. But Abdul Khalque had not given up just yet and looked after the crop beds regularly. Within a few days, his crop beds were returning to normal conditions as it was before the pre-flood time. Sub-associate Agriculture Officer Mr. Mahtab Hossain visited his plot and provided the necessary advice. Abdul Khalque took his advice and applied fertilizer, pesticides, and properly irrigated his field. SHOUHARDO III Program Technical Officer Roni Miah visited the land and advised Abdul Khaleque to plant dried twigs or young bamboo shoots to steer away the harmful pests from the crops. Within the next few weeks, the crops were ready to be harvested. A field day was arranged where farmers, community group members, Village Development Committee, influential people, and Sub-district agriculture officer of the village were invited to observe and analyze the paddy harvests with the help of SHOUHARDO III program. Sub-district agriculture officer Mr. Abdus Salam analyzed the ultimate result of harvest by reaping paddy from 4 square meter land involving the participants on the field day, and they found that 20 maund paddy grew in each Bigha of land. He talked about this flood-resistant Bina dhan (paddy)-11 and compliments on this invention that can stay underwater for 20-25 days and the crops beds does not get damaged. He added the paddy can be harvested within 110 days and since it is a short-lived crop, and another crop can be cultivated during the time before the Boro paddy season begins. The Upazila Coordinator of SHOUHARDO III expressed, since floods cannot be stopped and is a regular annual phenomenon, betterment of local populations protection and preparedness measures will be an effective way to reduce the loss and damages during floods.

Farmer Liton Mollah lamented,  “last time I planted paddy in 30 decimal land but it all got washed away by the floodwater, I could not harvest even a handful of it.” Impressed by the flood-resistant paddy, many of the farmers expressed their willingness to cultivate this variety in the coming monsoon season and wanted more improved seeds of this crop. Now, Abdul Khalque has preserved 100 kg seeds of this paddy. He kept some to feed his family and sold the rest 20 maunds for 15,000 Taka. He then added 32,000 Taka from his savings with this and bought a calf to add an alternate income source apart from paddy cultivation. In addition to that, his wife, Maya Khatun, adds to the income and ensures proper nutrition of the family by growing vegetables at home and rearing poultry. She is a member of SHOUHARDO’s EKATA group through which she received life skills training and applied the learnings by forging a way of alternate income for the family. She is also a member of the Village Savings and Loan Association group where she is saving money regularly. They aspire to improve the skills of their village people to fight against disasters in such a way that the disasters have no harmful impact on their lives in the future.