With diversified income sources come great opportunities even for the poorest

Sona (45) and Padula (35), as new parents, decided to take a chance in 2001 and move to Madan in Netorokona district in search of a better life for themselves and their growing family. Newcomers to the village, the resettlement tested their resilience as they found themselves hungry and knocking door-to-door for work opportunities. Nearing hopelessness, a land owner agreed to take them in as stay-in laborers for the house and farm where they earned just BDT 80 (USD 1) per day. The demands of the land owner’s production had them working day and night. The years passed quickly though, bringing them two more children in 2003 and 2005. Without enough money for three meals a day, Sona and Padula’s could not also bear the additional expense of their children’s educations. In 2016, they were identified as PEP participants of CARE Bangladesh’s Strengthening Household Ability to Respond to Development Opportunities (SHOUHARDO) III funded by the United States Agency for International Development (USAID) and the Government of Bangladesh (GoB). As experienced farmers, they were selected to receive training on on-farm production through the Farmers’ Field Business School (FFBS) – a learning by doing approach, putting farmers at the heart of learning and decision-making around new agricultural techniques. Following the FFBS training, they received BDT 3,000 (USD 35) as input support which afforded them the ability to buy ducks and goats for rearing. Sona and Padula consistently sold the eggs and milk at the local market for profit. After about six months, they sold all the animals and with some little saving r savings, were able to eventually lease a piece of land about 2.4 acres in size for an annual fee of BDT 30,000 (USD 355) from the same land owner who first welcomed them in Madan. They moved to their leased land, built a small house, and started cultivating different types of vegetables some of which they consumed but most were sold. 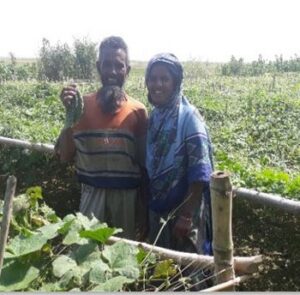 A challenging beginning transitioned into a life-changing and rewarding journey. In 2017, Sona and Padula happily welcomed their fourth child. By then they were earning a monthly income of BDT 70,000 (USD 827) with expenses of only BDT 25,000 (USD 295) which fully covered the families’ food, living expenses, and significant savings which they were investing for the children’s education. Today, both have been recognized as trusted community members and leaders. Whenever the opportunity presents itself, they speak of their story of change to their neighbors, and advocate for women’s role in productive activities, for Sona and Padula it took the collective efforts of a man and a woman to achieve what was not thinkable in their world. . Sona and Padula want their children to grow and be agents of change too, by helping the poor and extreme poor.