The objective was to share the findings from an eight-month-long pilot study into the use of banana stem haylage as animal feed.  The study was conducted by SHOUHARDO III in close collaboration with Professor Dr. A. K. M. Ahsan Kabir of the Bangladesh Agricultural University, Mymensingh.

USAID’s SHOUHARDO III program selected over 20 poor and extremely poor households owning at least one cow to participate in the pilot.  An existing program participant was also trained to produce haylage using a small production plant.  During the pilot phase the haylage generated was used to feed 10 cattle from the selected households.  Data on the animals was collected at 15 day intervals over three months. The eight-month long study was implemented in Binoder Char, Bakshiganj of Jamalpur district in the Char region.

Professor Dr. A. K. M. Ahsan Kabir, was the key-note speaker at the event and presented the findings of the pilot initiative.   During the event Md. Eyasin Ali, the trained entrepreneur producing haylage along with the participating program farmers shared their learning and experiences from this piloting initiative. 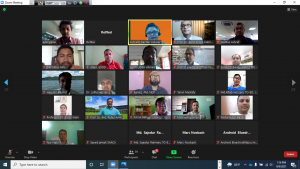 The findings of the field trial revealed an increased average weight gain of 553.93 grams per day for cattle given haylage.  Cattle given regular feed had an average growth of only 265.7 grams per day.

The farmers who participated in the trial indicated they were satisfied with the impact of haylage feed on their cows.  The participating entrepreneur (Md. Eyasin Ali) indicated confidence in the use of the technology and felt it was a viable business.

The additional participants at the event discussed the timely and environmentally friendly use of haylage feed, and highlighted its value in disaster scenarios. They recommended an expansion of production of haylage for use by targeted marginal farmers.

As a result of the study the SHOUHARDO III program has commenced actions to recruit new entrepreneurs and expand this activity in Gaibandha and Kurigram.

The event was live streamed on CARE Bangladesh’s Facebook page and can be accessed at: https://fb.watch/7Uh-MwwpJG/