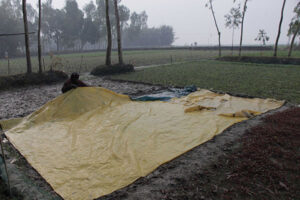 A second cold wave is affecting Bangladesh since the beginning of January. The first one struck in November last year and according to local news agencies, at least 300,000 people across the country were reported ill with 51 deaths due to respiratory-related sicknesses such as asthma, cough and cold, accompanied with fever. This condition is severely affecting the northern part of the country, where CARE’s Strengthening Household Ability to Respond to Development Opportunities (SHOUHARDO) III, a USAID-funded program, has wide coverage, especially in building the capacities of households and the local government in preparing and responding to any weather disturbance. Having been part of SHOUHARDO III, the program participants took on initiatives to protect their rice crops by covering them for the entire night with thick plastic sheets (made of polythene material) to keep them dry, remove the dew from the vegetable in the morning using jute sticks and take extra care of themselves by using thick enough clothes to keep them warm, especially for little children and the elders. The program complements these through strengthened disaster preparedness efforts specifically in the eight districts of char (Gaibandha, Jamalpur, Kurigram and Sirajganj) and haor (Habiganj, Kishoreganj, Netrokona and Sunamganj) areas in northern Bangladesh. Following this, SHOUHARDO III signed recently a partnership with the Regional Integrated Multi-Hazard Early Warning System for Africa and Asia (RIMES) in providing accurate weather information at the upazila level (used to be at the district level). The agreement evolves around the idea of conveying “what the weather is about” to “what the people should do”. For this cold wave, the program is tackling it innovatively where RIMES provided voice message to at least 2,000 program households through a phone call. RIMES also collected information from relevant agencies such as Department of Agricultural Extension and Bangladesh Rice Research Institute to add messages specifically for farmers on how to provide protective measures in saving their vegetables and other crops. The sample voice message that was sent out translates to: Sample Voice Message courtesy of RIMES Welcome to Agro-Meteorological Information Service! Today is 25th December 2019. As per the forecast of Bangladesh Meteorological Department, there is a chance of an increase in day temperature while the night temperature might remain the same for next 24 hours and after 27th, there is a chance of a decrease in night temperature of Sirajganj district. Further advisories from Department of Agricultural Extension and Bangladesh Rice Research Institute are: Cover the BORO seedbed from 6 PM to 9 AM with polythene sheets. Irrigate every day in the morning after draining the previous day’s water and remove the dew from the seedbed. Tube well water is a good option in this case. Regular irrigation keeps the seedlings safe from pests, which is very common in this type of weather. If the seedlings become yellow, apply 280gm urea per decimal. If this does not work, use gypsum 400gm per decimal. Vaccinate your poultry birds for Newcastle disease, which might outbreak in this weather. This message was broadcasted in association with SHOUHARDO III Program, CARE Bangladesh, and Funded by USAID and Government of Bangladesh Concurrently, the program mobilized Union Disaster Volunteers with the full support of the Union Parishads to roam the villages with their megaphones, advising people on how to adapt. The government’s local veterinary services staff also vaccinated the animals to protect them from diseases (such as Newcastle disease, a respiratory illness common in poultry and other bird species) that pose threat in this type of weather. “We know that each winter can be different from the previous one, but now, we know how we can prepare better and respond to avoid being sick”, said Abu Taleb Sarker from Solagari Village, Bidyanando Union, Rajarhat, Kurigram.